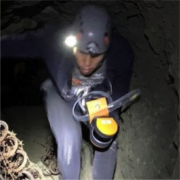 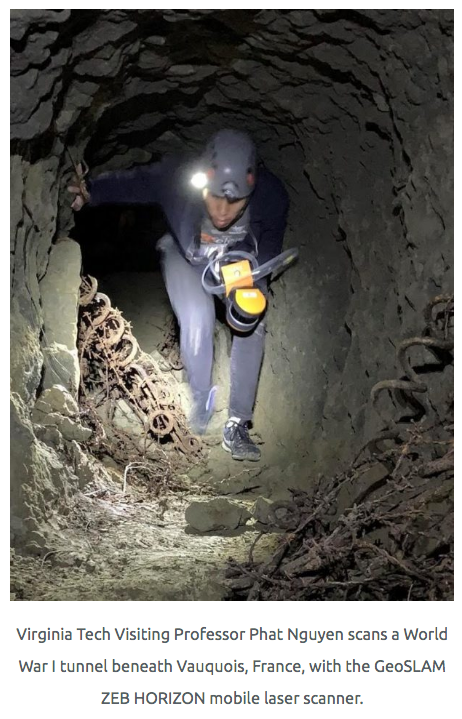 The Creative Technologies Program at Virginia Polytechnic Institute (Virginia Tech) has created an immersive simulation that enables participants to experience a World War I battlefield with their senses of sight, hearing, and touch. The simulation combines a digital Virtual Reality (VR) environment with a life-sized physical model created from 3D scan data captured with the GeoSLAM ZEB-HORIZON laser scanner.

“The Virginia Tech team has developed a unique experience that brings the reality of war to life for students and museum goers,” said Shelley Copsey, GeoSLAM CEO.

The simulation recreates the tunnels beneath the village of Vauquois in France where French and German troops mined beneath each other’s positions and detonated explosives in the First World War. Almost entirely destroyed, the village is now a series of craters, trenches, and sections of preserved tunnels.

“Vauquois tells a unique story of tunnel warfare in World War I,” said Todd Ogle, Executive Director of Applied Research in Immersive Environments and Simulations at Virginia Tech. “[Participants] crawl through the physical tunnel wearing the VR goggles and can reach out and touch real things.”

Phat Nguyen, a Virginia Tech Visiting Professor, explained the Creative Technologies team had won a grant to develop the immersive technique, but scanning the cramped tunnels with traditional stationary laser scanners was taking too long. Before their second trip to France, they obtained the handheld ZEB-HORIZON mobile device, which turned their project around.

“What was exciting for us was the way this device captured data with accuracy and speed,” said Nguyen. “The speed of field work nearly tripled with the ZEB-HORIZON.”