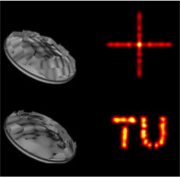 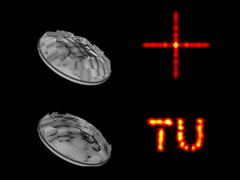 Terahertz radiation can be used for a wide variety of applications and is used today for airport security checks just as much as it is for material analysis in the lab. The wavelength of this radiation is in the millimetre range, meaning that it is significantly larger than the wavelength of visible light. It also requires specialised techniques to manipulate the beams and get them into the right shape. At TU Wien, shaping terahertz beams is now something of a resounding success: with the help of a precisely calculated plastic screen produced on the 3D printer, terahertz beams can be shaped as desired.

Like lenses – only better
“Normal plastic is transparent for terahertz beams, in a similar way as glass is for visible light,” explains Prof. Andrei Pimenov from the Institute of Solid State Physics at TU Wien. “However, terahertz waves slow down a little when they pass through plastic. This means that the crests and troughs of the beam become a little displaced – we call that phase shifting.”