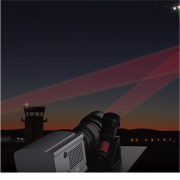 Laser beam strikes on aircraft have long been a concern for aviation authorities across the world. In 2017, the Federal Aviation Administration in the United States received 6,754 individual reports of lasers being purposely aimed at their pilots, and in past week, five aircraft were targeted as they flew in to land at Glasgow Airport in Scotland. As well as the immense danger posed to human life, where a pilot potentially loses visibility of the approaching runway, the aiming of lasers at aircraft is illegal in many countries, with the threat of prosecution for those found guilty of the offence.