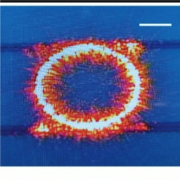 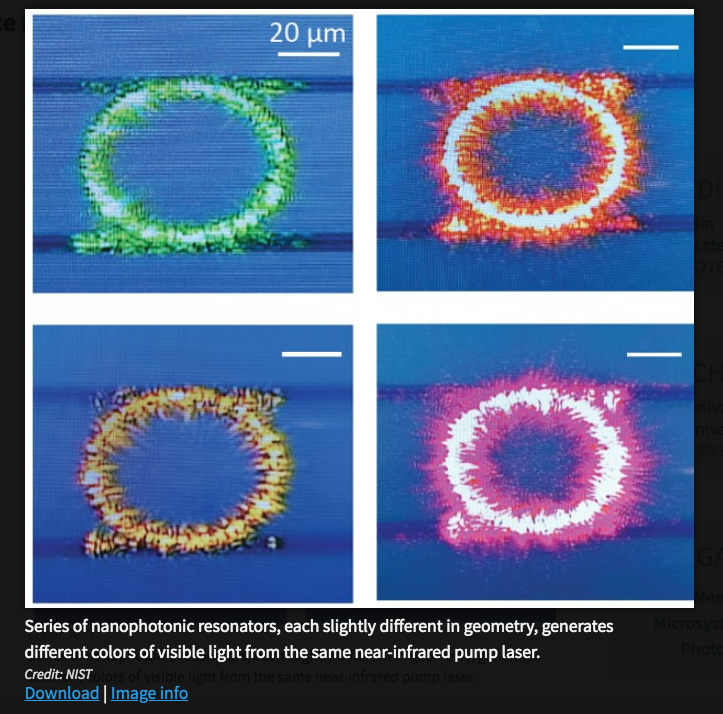 Researchers at the National Institute of Standards and Technology (NIST) and the University of Maryland have developed a microchip technology that can convert invisible near-infrared laser light into any one of a panoply of visible laser colors, including red, orange, yellow and green. Their work provides a new approach to generating laser light on integrated microchips.

The technique has applications in precision timekeeping and quantum information science, which often rely on atomic or solid-state systems that must be driven with visible laser light at precisely specified wavelengths. The approach suggests that a wide range of such wavelengths can be accessed using a single, small-scale platform, instead of requiring bulky, tabletop lasers or a series of different semiconductor materials. Constructing such lasers on microchips also provides a low-cost way to integrate lasers with miniature optical circuits needed for optical clocks and quantum communication systems.

The study, reported in the October 20 issue of Optica, contributes to NIST on a Chip, a program that miniaturizes NIST’s state-of-the-art measurement-science technology, enabling it to be distributed directly to users in industry, medicine, defense and academia.

Atomic systems that form the heart of the most precise and accurate experimental clocks and new tools for quantum information science typically rely on high-frequency visible (optical) laser light to operate, as opposed to the much lower frequency microwaves that are used to set official time worldwide.

Although researchers have made great progress in creating compact, high-performance lasers at the near-infrared wavelengths used in telecommunications, it has been challenging to achieve equivalent performance at visible wavelengths. Some scientists have made strides by employing semiconductor materials to generate compact visible-light lasers. In contrast, Xiyuan Lu, Kartik Srinivasan and their colleagues at NIST and the University of Maryland in College Park adopted a different approach, focusing on a material called silicon nitride, which has a pronounced nonlinear response to light.

Materials such as silicon nitride have a special property: If incoming light has high enough intensity, the color of the exiting light does not necessarily match the color of the light that entered. That is because when bound electrons in a nonlinear optical material interact with high-intensity incident light, the electrons re-radiate that light at frequencies, or colors, that differ from those of the incident light.

(This effect stands in contrast to the everyday experience of seeing light bounce off a mirror or refract through a lens. In those cases, the color of the light always remains the same.)

Lu and his colleagues employed a process known as third-order optical parametric oscillation (OPO), in which the nonlinear material converts incident light in the near-infrared into two different frequencies. One of the frequencies is higher than that of the incident light, placing it in the visible range, and the other is lower in frequency, extending deeper into the infrared. Although researchers have employed OPO for years to create different colors of light in large, table-top optical instruments, the new NIST-led study is the first to apply this effect to produce particular visible-light wavelengths on a microchip that has the potential for mass production.

To miniaturize the OPO method, the researchers directed the near-infrared laser light into a microresonator, a ring-shaped device less than a millionth of a square meter in area and fabricated on a silicon chip. The light inside this microresonator circulates some 5,000 times before it dissipates, building a high enough intensity to access the nonlinear regime where it gets converted to the two different output frequencies.

To create a multitude of visible and infrared colors, the team fabricated dozens of microresonators, each with slightly different dimensions, on each microchip. The researchers carefully chose these dimensions so that the different microresonators would produce output light of different colors. The team showed that this strategy enabled a single near-infrared laser that varied in wavelength by a relatively small amount to generate a wide range of specific visible-light and infrared colors.

“The benefit of our approach is that any one of these wavelengths can be accessed just by adjusting the dimensions of our microresonators,” said Srinivasan.

“Though a first demonstration,” Lu said, “we are excited at the possibility of combining this nonlinear optics technique with well established near-infrared laser technology to create new types of on-chip light sources that can be used in a variety of applications.”