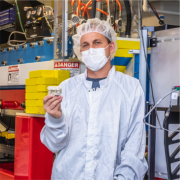 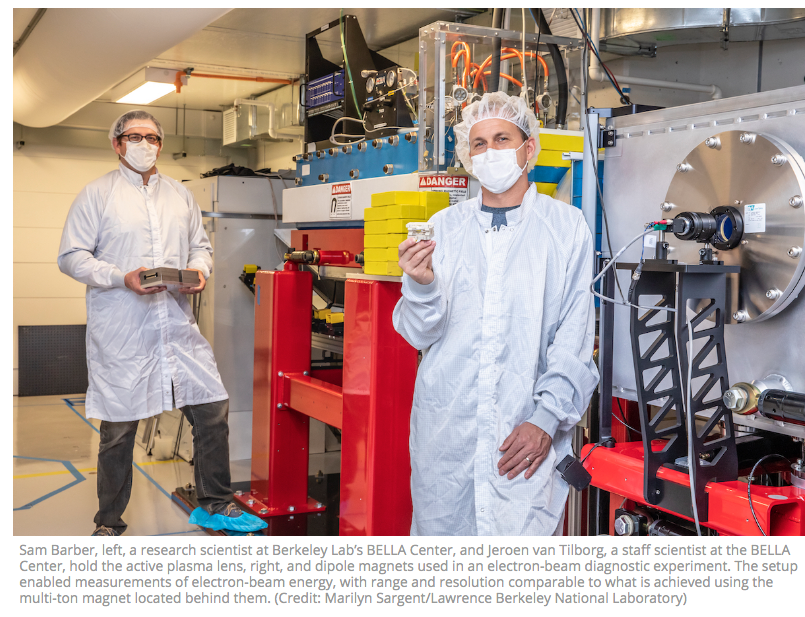 Physicists at the U.S. Department of Energy’s Lawrence Berkeley National Laboratory (Berkeley Lab) are figuring out new ways to accelerate electrons to record-high energies over record-short distances with a technique that uses laser pulses and exotic matter known as a plasma. But measuring the properties of the high-energy electron beams produced in laser-plasma acceleration experiments has proven challenging, as the high-intensity laser must be diverted without disrupting the electron beam.

The new system uses ultrathin liquid-crystal films, developed by Prof. Douglass Schumacher and his team at Ohio State University, to redirect the laser while allowing the electron beam to pass through, largely unaffected. The laser forms a plasma that reflects the bulk of its laser light.

While each laser pulse destroys the liquid-crystal film, similar to a bubble machine, the liquid-crystal film is replenished by a rotating disc and wiper device after each laser shot. The films formed by this device are just tens of nanometers (billionths of meters) in thickness, about a factor of 1,000 thinner than those in other replenishable plasma mirror systems that use VHS cassette tape, for example. This reduction in thickness serves to preserve the electron beam’s properties.

The liquid-crystal plasma mirror (LCPM) also enables the use of a gas-filled, 6-centimeter-long strong focusing device for the electron beam, known as an active plasma lens.

This lens allows a compact alternative to a large diagnostic tool called a magnetic spectrometer device, which has bulky magnets that weigh more than a ton and are coupled to a large power supply.

“We were able to replace this with dipole (two-pole) magnets about the size of a sandwich,” said Sam Barber, a research scientist at the BELLA Center in Berkeley Lab’s Accelerator Technology and Applied Physics (ATAP) Division. “Laser plasma accelerators can produce high-energy electrons in compact footprints, but there is still much that can be done to shrink some of the components, including electron beam diagnostics.” 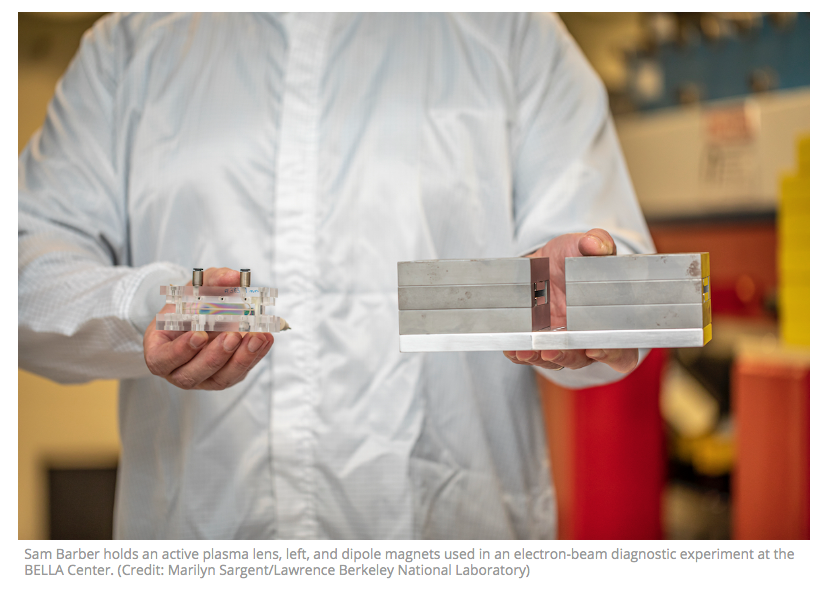 He added, “This is a huge reduction in the scale. We are combining a petawatt (high-power) laser with ultrathin LCPMs and active plasma lenses – all novel technologies that have just recently been developed. We combined all three of them and we got a nice result. We are making big steps forward. There is a whole slew of new applications that this could be used for.”

Barber was the lead author of a study detailing the performance and setup of the new diagnostic tool, published in the journal Applied Physics Letters. Other BELLA Center researchers participated in the study, too, along with researchers from UC Berkeley and Ohio State University. The current advances were supported by LaserNetUS, the recently formed network of high-power laser facilities that is funded by the DOE Office of Science, Office of Fusion Energy Sciences, and Office of High Energy Physics.

Carl Schroeder, a Berkeley Lab senior scientist who is deputy director of the BELLA Center, said that besides its compactness, the new diagnostic technique can collect several electron-beam properties at once, including the detailed energy distribution of the electron beam and the beam’s emittance, on a single-shot basis. Emittance is a critical property of an electron beam that dictates how tightly the beam can be focused. A low emittance means the beam can be focused down to a very small spot, crucial for most accelerator applications like colliders and free-electron lasers.

“Typically, these are multishot diagnostics,” he said, which average the measurements of several beam pulses but don’t measure on a pulse-by-pulse basis – as does the new technique.

In the demonstrated setup, a laser is focused into a gas cell, where it creates and interacts with a plasma, generating and accelerating an electron beam. After passing through this cell, the combined laser beam and electron beam arrive at the LCPM, at which point the laser is deflected while the electron beam is transmitted – with negligible disruption.

The electron beam then passes through the active plasma lens. The lens is used to focus the electron beam into a sequence of small magnets. The magnetic field disperses the electrons according to energy – much like the way light is dispersed by color when passing through a prism.

The measurements can ultimately help researchers to troubleshoot, tune, and improve the performance of laser-plasma acceleration experiments, and the setup could potentially be relevant for future collider applications and compact X-ray free-electron lasers, researchers noted, which could have a wide array of applications.

“You want to be able to rapidly characterize these beams and use that as feedback for optimization,” Barber said. “This is useful for the characterization and control of electron-beam properties.”

The study was supported by the U.S. Department of Energy Office of Science, which also supports the BELLA Center, and by the Gordon and Betty Moore Foundation.