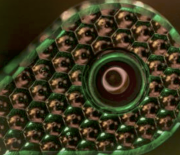 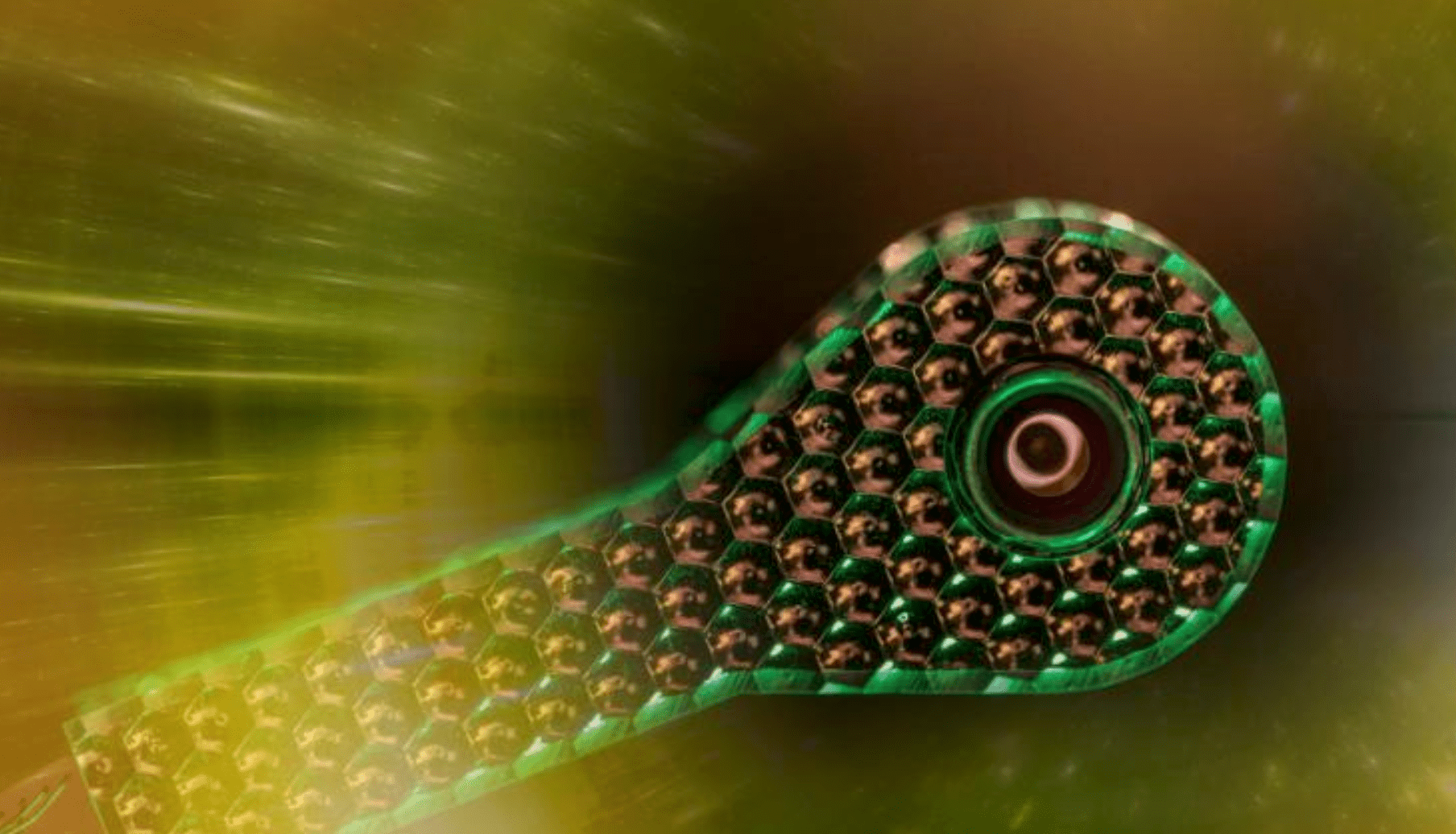 On the one-year anniversary of achieving a yield of more than 1.3 megajoules at LLNL’s National Ignition Facility, the scientific results of this record experiment have been published in three peer-reviewed papers: one in Physical Review Letters and two in Physical Review E. This stylized image shows a cryogenic target used for these record-setting inertial fusion experiments. Image by James Wickboldt/LLNL.

After decades of inertial confinement fusion research, a yield of more than 1.3 megajoules (MJ) was achieved at Lawrence Livermore National Laboratory’s (LLNL’s) National Ignition Facility (NIF) for the first time on Aug. 8, 2021, putting researchers at the threshold of fusion gain and achieving scientific ignition.

“The record shot was a major scientific advance in fusion research, which establishes that fusion ignition in the lab is possible at NIF,” said Omar Hurricane, chief scientist for LLNL’s inertial confinement fusion program. “Achieving the conditions needed for ignition has been a long-standing goal for all inertial confinement fusion research and opens access to a new experimental regime where alpha-particle self-heating outstrips all the cooling mechanisms in the fusion plasma.”

The papers describe, in detail, the results from Aug. 8, 2021 and the associated design, improvements and experimental measurements. LLNL physicist Alex Zylstra, lead experimentalist and first author of the experimental Physical Review E paper, noted that in 2020 and early 2021 the Lab conducted experiments in the “burning plasma” regime for the first time, which set the stage for the record shot.

“From that design, we made several improvements to get to the Aug. 8, 2021, shot,” he said. “Improvements to the physics design and quality of target all helped lead to the success of the August shot, which is discussed in the Physical Review E papers.”

This experiment incorporated a few changes, including improved target design. “Reducing the coasting-time with more efficient hohlraums compared to prior experiments was key in moving between the burning plasma and ignition regimes,” said LLNL physicist Annie Kritcher, lead designer and first author of the design Physical Review E paper. “The other main changes were improved capsule quality and a smaller fuel fill tube.” 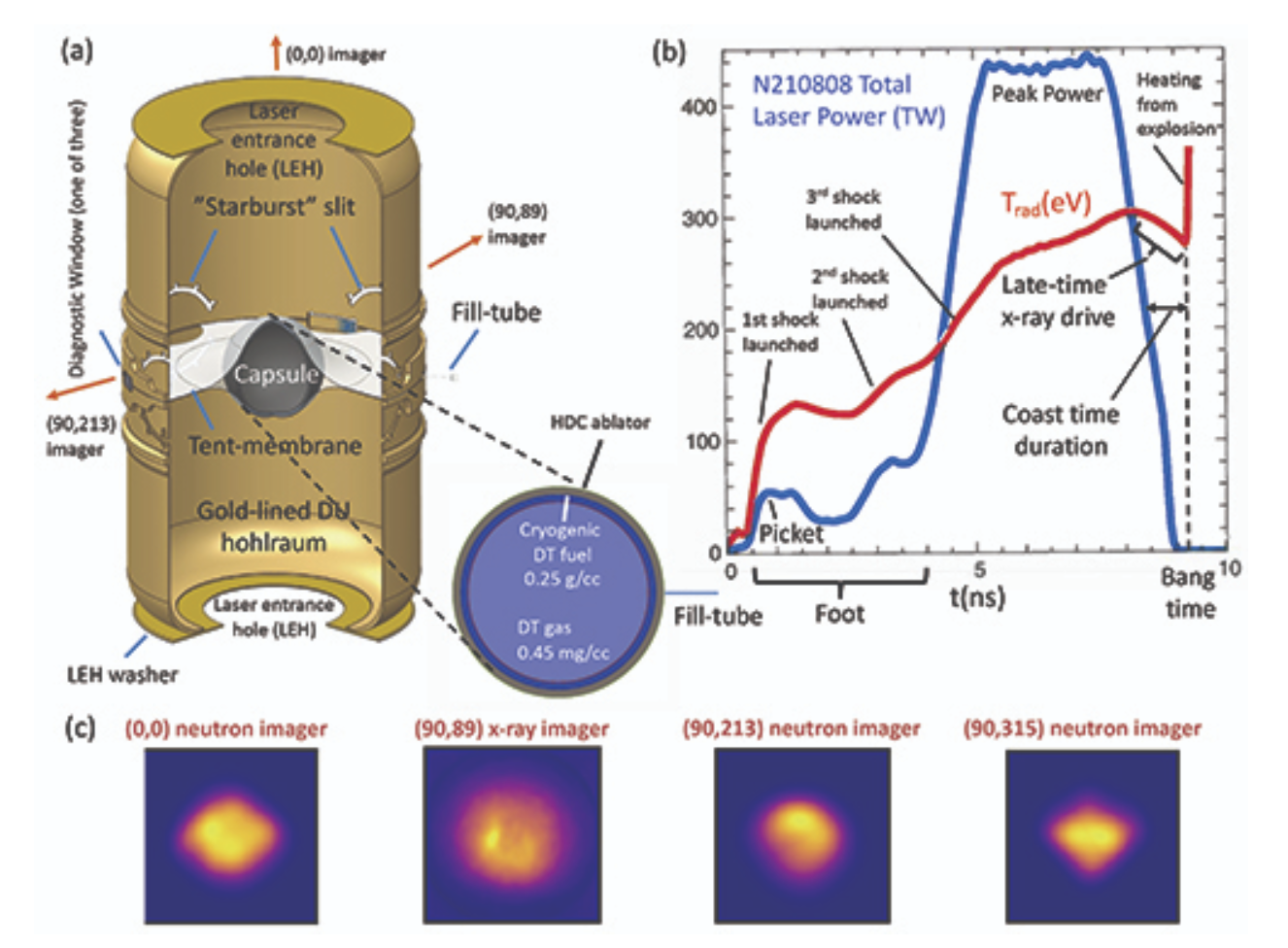 This three-part image shows the cut-away characteristic target geometry (a) that includes a gold-lined depleted uranium hohlraum surrounding an HDC capsule with some features labeled. The capsule, ~2 mm in diameter, at the center of the ~1 cm height hohlraum, occupies a small fraction of the volume. Laser beams enter the target at the top and bottom apertures, called laser entrance holes. In (b), total laser power (blue) vs. time and simulated hohlraum radiation temperature for the Aug. 8, 2021 experiment are shown with a few key elements labeled. All images are 100 square microns. Imaging data is used to reconstruct the hotspot plasma volume needed for inferring pressure and other plasma properties.

Since the experiment last August, the team has been executing a series of experiments to attempt to repeat the performance and to understand the experimental sensitivities in this new regime.

“Many variables can impact each experiment,” Kritcher said. “The 192 laser beams do not perform exactly the same from shot to shot, the quality of targets varies and the ice layer grows at differing roughness on each target. These experiments provided an opportunity to test and understand the inherent variability in this new, sensitive experimental regime.”

While the repeat attempts have not reached the same level of fusion yield as the August 2021 experiment, all of them demonstrated capsule gain greater than unity with yields in the 430-700 kJ range, significantly higher than the previous highest yield of 170 kJ from February 2021. The data gained from these and other experiments are providing crucial clues as to what went right and what changes are needed in order to repeat that experiment and exceed its performance in the future. The team also is utilizing the experimental data to further understanding of the fundamental processes of fusion ignition and burn and to enhance simulation tools in support of stockpile stewardship.

Looking ahead, the team is working to leverage the accumulated experimental data and simulations to move toward a more robust regime – further beyond the ignition cliff – where general trends found in this new experimental regime can be better separated from variability in targets and laser performance.

Efforts to increase fusion performance and robustness are underway via improvements to the laser, improvements to the targets and modifications to the design that further improve energy delivery to the hotspot while maintaining or even increasing the hot-spot pressure. This includes improving the compression of the fusion fuel, increasing the amount of fuel and other avenues.

“It is extremely exciting to have an ‘existence proof’ of ignition in the lab,” Hurricane said. “We’re operating in a regime that no researchers have accessed since the end of nuclear testing, and it’s an incredible opportunity to expand our knowledge as we continue to make progress.”