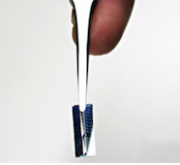 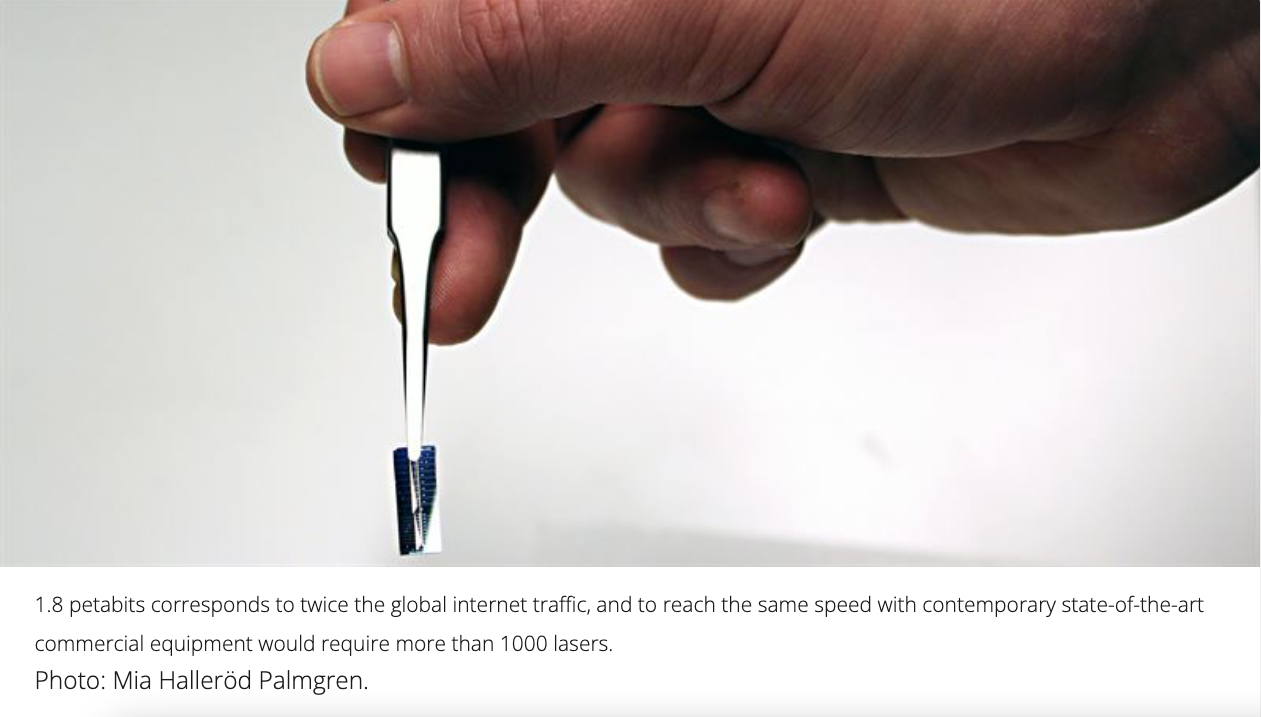 An international group of researchers from Technical University of Denmark (DTU) and Chalmers University of Technology has set a world record by transmitting 1.8 petabits per second using only a single laser and a single optical chip. Victor Torres Company is head of the research group that has developed and manufactured the chip.
“This chip produces a frequency comb with ideal characteristics for fibre-optical communications,” he says.

To put it in perspective, 1.8 petabits corresponds to twice the global internet traffic. To reach the same speed with contemporary state-of-the-art commercial equipment would require more than 1000 lasers.

Fundamental to this success is the light source, a specially designed optical chip which can use the light from a single infrared laser to create a rainbow spectrum of colours, or frequencies. Each colour has the ability to be isolated and imprint data and can then be reassembled and sent over an optical fibre, thus transmitting data. 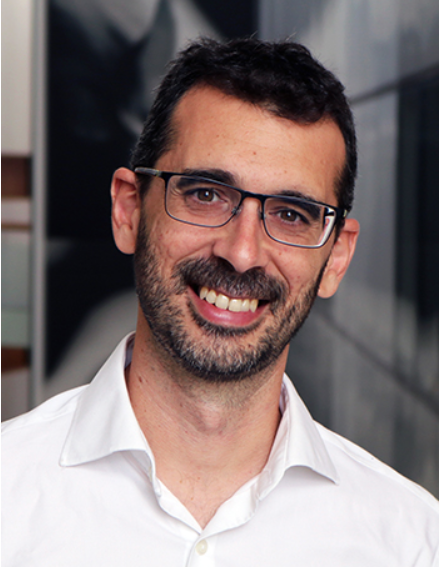 “At Chalmers, we have been relentlessly developing the silicon nitride waveguide technology for about ten years,” says Victor Torres Company, professor at MC2 and head of the research group that developed and manufactured the chip.

A key factor in the research regarding developing this kind of chip is the so called “Q factor” – the quality factor. It is a physical characteristic that measures the optical losses – the higher Q factor, the lower the losses.

“Since 2019, we are one of the very few groups in the world who can manufacture integrated micoresonators with an optical quality exceeding ten million,” says Victor Torres Company.

Interestingly enough, the chip was not optimized for this particular application – in fact, some of the characteristic parameters were achieved by coincidence and not by design.

Exabit speeds within reach
“However, with efforts in my team, we are now capable to reverse engineer the process and achieve with high reproducibility microcombs for target applications in telecommunications,” says Victor Torres Company. “We are now moving towards understanding the characteristics of these newer, more reproducible microcombs based on what we term ‘photonic molecules’ because we believe that they will enable the vision of reaching exabit per second speeds in the future.”

Professor Leif Katsuo Oxenløwe, Head of the Centre of Excellence for Silicon Photonics for Optical Communications (SPOC) at DTU, says:

“Our calculations show that—with the single chip made by Chalmers University of Technology, and a single laser—we will be able to transmit up to 100 Pbit/s. The reason for this is that our solution is scalable—both in terms of creating many frequencies and in terms of splitting the frequency comb into many spatial copies and then optically amplifying them, and using them as parallel sources with which we can transmit data. Although the comb copies must be amplified, we do not lose the qualities of the comb, which we utilize for spectrally efficient data transmission.”

The researchers’ solution bodes well for the future power consumption of the Internet.

“In other words, our solution provides a potential for replacing hundreds of thousands of the lasers located at Internet hubs and data centres, all of which guzzle power and generate heat. We have an opportunity to contribute to achieving an Internet that leaves a smaller climate footprint,” says Leif Katsuo Oxenløwe.

“Truly rewarding”
As for Victor Torres Company, the success with the chip relates to the reserach he conducts within his European Research Council (ERC) project.

”One of the central goals in the ERC project is that microcombs would enable the petabit-class transmitters that we have just demonstrated with DTU by combining this chip-scale sources with advanced multi-core fiber, so the results from this collaboration have been truly rewarding. Another serendipity aspect is the collaboration with DTU itself. This was facilitated by another research environment grant by the Swedish research council where Anders Larsson is the main PI”, he says.

”It has been fantastic to leverage this synergy to pursue truly collaborative science. My take from this adventure is that freedom, hard work and a bit of luck pay off in science!”