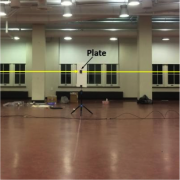 Scientists have assumed that future terahertz data links would have an inherent immunity to eavesdropping, but new research shows that’s not necessarily the case.

A new study shows that terahertz data links, which may play a role in ultra-high-speed wireless data networks of the future, aren’t as immune to eavesdropping as many researchers have assumed. The research, published in the journal Nature, shows that it is possible for a clever eavesdropper to intercept a signal from a terahertz transmitter without the intrusion being detected at the receiver.

“The conventional wisdom in the terahertz community has been that it’s virtually impossible to spy on a terahertz data link without the attack being noticed,” said Daniel Mittleman, a professor in Brown University’s School of Engineering and a coauthor of the research. “But we show that undetected eavesdropping in the terahertz realm is easier than most people had assumed and that we need to be thinking about security issues as we think about designing network architectures.”