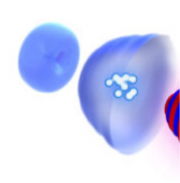 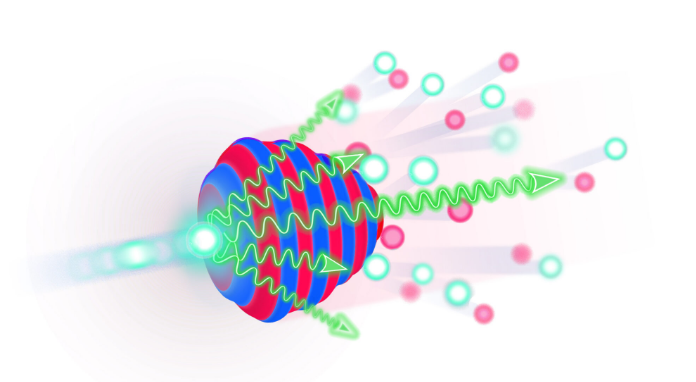 ZEUS’s full-power 3 petawatt laser pulse collides with an electron beam, and this creates pairs of electrons and their antiparticles, positrons, from the vacuum. This experiment will probe extreme aspects of quantum electrodynamics, the leading theory explaining the interaction of light and matter. Image credit: Steve Alvey/University of Michigan Engineering, Communications & Marketing.

Said to put the U.S. back on the map of high power laser facilities, the 3 petawatt ZEUS laser at the University of Michigan has been awarded $18.5 million by the National Science Foundation to establish it as a federally funded international user facility.

ZEUS is expected to begin its first experiments in early 2022.

“We are really looking forward to the exciting experiments that this new facility will make possible,” said Karl Krushelnick, director of the Center for Ultrafast Optical Science, where ZEUS’s construction is almost finished.

The U.S. built the world’s first petawatt laser in 1996 but hasn’t kept pace with more ambitious systems under construction elsewhere in the world. This includes two 10-petawatt lasers in Europe and a 5.3-petawatt laser in China, which also has plans to build a 100-petawatt laser. While the new laser doesn’t pack as much raw power, its approach will simulate a laser that is roughly a million times more powerful than its 3 petawatts. 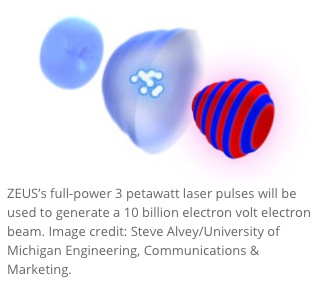 ZEUS will primarily be used to study extreme plasmas, a state of matter in which electrons break free of their atoms, forming what amounts to charged gases.

Experiments at the facility are expected to contribute to the understanding of how the universe operates at the subatomic level, how astrophysical phenomena such as jets can be produced by black holes, how materials change on extremely fast timescales, and to the development of smaller and more efficient particle accelerators for medical imaging and treatment.

“Extreme plasma made with ‘table-top’ laser technology offers a lower-cost alternative for fundamental research in physics compared to large scale particle accelerators, which cost billions to build,” said Franko Bayer, project manager of the construction of ZEUS. “We are very excited since this support enables the U.S plasma science community, and us at U-M, to make long-term research plans.”

At first, one of the three target areas will launch experiments at half a petawatt, a sixth of its peak power. The laser will send either one or five ultrashort laser pulses per second, with each pulse lasting between 20 and 25 quadrillionths of a second, into targets made of gas—turning gas atoms into plasma. The system will gradually ramp up to full power over two years, scheduled to begin its signature experiments and user operations in October 2023.

That setup will eventually send the full power laser beam into a vacuum chamber where the laser beam will be focused on a gas target with a colliding electron beam traveling in the opposite direction, simulating a much higher power zetawatt laser. While a petawatt is a quadrillion watts, or a 1 followed by 15 zeros, a zetawatt is 1 quintillion watts, or a 1 followed by 21 zeros. This gives ZEUS its name, the “Zetawatt Equivalent Ultrashort pulse laser System.” At full power, pulses will come every minute.

In step with operations, the funding from the NSF will ramp up gradually as the ZEUS facility reaches full capacity, providing $1 million for the year starting in October 2021 and $5.5 million for the year starting October 2025, the last year of the award. ZEUS is expected to operate as the most powerful laser in the U.S. and as an open user facility, for at least a decade.

ZEUS will primarily be an international user facility, enabling experimental teams from around the world to travel to U-M to run experiments. Proposals will be evaluated by an external panel of scientists and engineers. Because of the funding from the NSF, there will be no cost to users whose experiment proposals are selected to conduct research.

“We look forward to the greatly increased capability and access to the highest intensity lasers that the NSF ZEUS user facility will provide for the U.S. and international scientific community,” said Vyacheslav (Slava) Lukin, the NSF program director for plasma physics.

“From the fundamental physics of light and matter, to powerful astrophysical phenomena like blazars, to compact particle accelerators, the users of the facility will be able to explore a wide range of phenomena while pushing the frontiers of technology.”