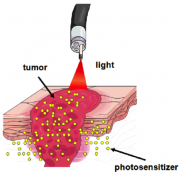 Photodynamic therapy (PDT) is a common term in the medical community which has been used to describe treatments ranging from near-infrared laser-induced vascular dilatation to photo-thermal excitation of nanorods embedded in cancer tumors. For the purposes of this blog, we are going to focus on a rapidly growing subset of PDT where laser light is used to activate both dermal and subdermal treatments utilizing a specialized drug, called a photosensitizing agent. In this application, the laser in effect serves as a “key” which allows for the active pharmaceutical ingredient to be selectively “turned on” when excited by a specific wavelength of light.This drug can either be injected into the bloodstream through a vein or applied topically to the skin. PDT has been shown to be as effective as surgery or radiation for treating certain cancers, without the risks of invasive surgery or the long-term side effects of radiation treatment. Additionally, it allows for the procedure to be highly targeted since the impact of the drug is localized to the region of the body which is illuminated by the laser source, as shown in the figure below. Since PDT can only treat areas where light can reach, it is typically limited to treating dermal and subdermal tumors, although it has also been used endoscopically as well.