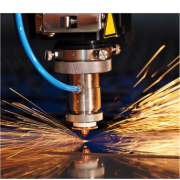 Lawrence Livermore National Laboratory (LLNL) researchers have discovered an efficient mechanism for laser ablation (material removal) that could help pave the way to the use of lower-energy, less costly lasers in many industrial laser processing applications.

The new method which was performed using ultrashort laser pulses lasting a few picoseconds (trillionths of a second), was reported in a Journal of Applied Physics paper published online. The method uses short-wavelength, high-fluence (energy per unit area) laser pulses to drive shock waves that melt the target material. After the passage of the shock wave, the melt layer is placed under tension during a process known as relaxation, ultimately leading to the ejection of material through cavitation (unstable bubble growth).

The researchers used a combination of experiments and enhanced computer simulations in a previously unexplored range of laser energies and wavelengths to study picosecond laser pulse ablation of aluminum, stainless steel and silicon. Their findings show that ultraviolet (UV) picosecond pulses at fluences above 10 joules per square centimeter (J/cm2) can remove more material with less energy than longer-wavelength pulses.

According to Jeff Bude, NIF & Photon Science Deputy Principal Associate Director for Science & Technology, the team discovered that this range above 10 joules per square centimeter, particularly for UV laser pulses, was behaving very differently than lower fluences and longer wavelengths. The removal rate jumps when beyond 10 joules per square centimeter, and especially for the UV light. At the same time the jump in the removal is accompanied by an increase in the removal efficiency — a reduction in the amount of energy required to remove a given volume of material.

This really intrigued the researchers; it suggested that maybe there’s a different mechanism going on here. So the team decided that the picosecond laser ablation would provide a good test case to probe ablation physics in a regime that was not well understood. The study is thought to be the first comprehensive look at the picosecond-pulse laser ablation process. Selected as an “Editor’s Pick” by the Journal of Applied Physics editors, the research was part of an ongoing Laboratory Directed Research and Development (LDRD) study of pulsed-laser material modification led by Bude.

The researchers compared the results from laser wavelengths of 355 nanometers (UV) and 1,064 nm (near-infrared) over a fluence range of 0.1 to 40 J/cm2 and found that the shorter wavelengths enhanced removal by nearly an order of magnitude over the measured removal at 1,064 nm. Laser ablation was many times more efficient at the UV wavelength compared to the near-infrared in all three materials. Simulations using the radiation hydrodynamic code HYDRA showed that the increase in ablation efficiency was due to the UV laser pulses penetrating deeper into the ablative plume and depositing energy closer to the target surface, which resulted in higher-pressure shocks, deeper melt penetration and more extensive removal due to cavitation. 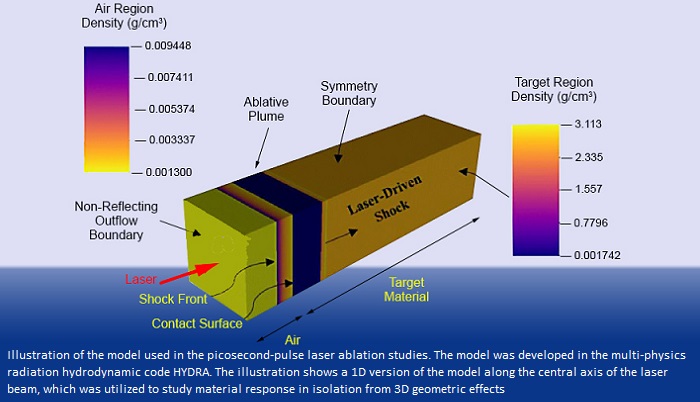 The removal mechanism — shock heating creating a melt and then removing that with cavitation, according to Bude, requires less energy to remove material than vaporization of the material. That’s the explanation for why it’s more efficient. This discovery was really facilitated by the team’s unique modeling and simulation capability at the Lab, said LLNL analyst Wes Keller, lead author of the paper. According to Wes, this was a particularly challenging problem to model because the laser energy deposition process was closely coupled with the material hydrodynamic response, requiring a unique code like HYDRA that has this integrated capability. In some ways the research was a case of turning a challenge into an opportunity. Shortly after the study began, the researchers realized that material response to picosecond lasers was a good deal more complicated than if the more common femtosecond (quadrillionths of a second) lasers had been used.

According to Bude, when trying to understand picosecond laser processing, some of the simplifying assumptions of the physics that are achieved with very short (femtosecond) pulses are no longer reliable. Rather than simply absorbing the laser energy and vaporizing, the material was moving; it was evolving in the laser plume. This meant that the models had to be tweaked to account for both the hydrodynamics of the melting material and the interactions between the laser pulse and the plasma (ionized gas) in the ablative plume.

The team really needed to model laser-plasma interaction correctly, according to Bude and thus they had to do a lot of creative experiments to fix some inadequacies in the model. Ultimately, they were able to identify the essential physics of this regime, and discovered that they have to have shock heating to create micron-deep melt. And then after the deep melt is created with shock heating a mechanism to remove it, is needed. The team discovered that that mechanism was cavitation. Once they realized that temporally shaped, or timed, pulses could exploit the instabilities in the melted material, they were able to use shaped pulses to create a more efficient way to remove material. The researchers were able to leverage this understanding to do laser processing a different way, so it actually had a lot of spinoff benefits, some of which will be detailed in additional papers now in preparation.

The results also suggest that picosecond-pulse lasers offer several advantages over the more commonly used femtosecond lasers in terms of cost, efficiency and damage control. In addition, they offer options for efficient frequency conversion for wavelength flexibility. According to Bude, there is some indication that in the regime of picosecond to tens of picoseconds (pulses) one can get the same sort of quality and behavior in laser cutting, drilling and shaving functions that could be done with more expensive lasers operating at less than a picosecond. The findings thus could lead to new or more efficient laser applications in industry, national defense, medicine and many other fields.