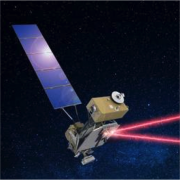 NASA’s Laser Communications Relay Demonstration will demonstrate the use of optical, or laser, communications relay satellites, which can send large amounts of data from space to scientists and researchers on Earth. 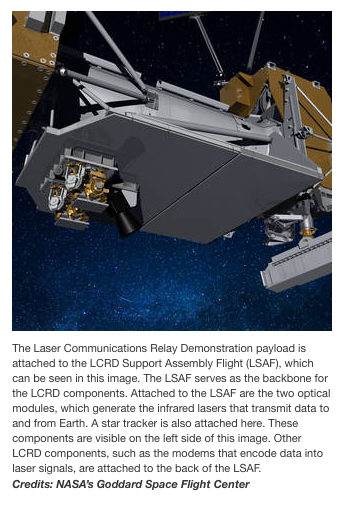 The Laser Communications Relay Demonstration (LCRD) will showcase the unique capabilities of optical communications. Currently, most NASA missions use radio frequency communications to send data to and from spacecraft. Radio waves have been used in space communications since the beginning of space exploration and have a proven track record of success. However, as space missions generate and collect more data, the need for enhanced communications capabilities becomes paramount.

The LCRD payload will be hosted onboard the U.S. Department of Defense’s Space Test Program Satellite 6 (STPSat-6). Once in orbit, engineers located at LCRD’s mission operations center in Las Cruces, New Mexico, will start the activation process by turning the payload on and get it ready to start transmitting data over infrared lasers. Until its first user is launched, LCRD will practice sending test data to and from its ground stations. This test data will be sent up through radio frequency signals from the mission operations center and then the LCRD spacecraft will reply over optical signals. This test data will include spacecraft health data; tracking, telemetry, and command data; and sample user data to ensure LCRD is properly operating.

Missions in space will send their data to LCRD, which will then relay the data down to designated ground stations on Earth. NASA has been leveraging communications relay satellites since 1983 when the first Tracking and Data Relay Satellite launched. With relays, missions are not required to have direct line-of-sight to antennas on Earth, increasing communications coverage. LCRD creates a continuous path for data flowing from missions in space to ground stations on Earth, making a complete end-to-end system. Additionally, LCRD’s ability to both send and receive data from missions and the ground stations makes the system two-way. Together, these capabilities make LCRD NASA’s first two-way, end-to-end optical relay.

LCRD is a technology demonstration that will pave the way for future optical communications missions. Future missions that decide to use optical communications could potentially use LCRD as their relay. One of LCRD’s first operational users will be the Integrated LCRD Low-Earth Orbit User Modem and Amplifier Terminal (ILLUMA-T), a payload that will be hosted on the International Space Station. The terminal will receive high-resolution science data from experiments and instruments onboard the space station and then transfer this data to LCRD, which will then transmit it to a ground station. After the data arrives on Earth, it will be delivered to mission operation centers and mission scientists. 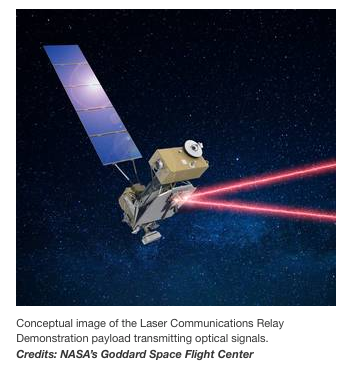 LCRD was developed by NASA’s Goddard Space Flight Center and is flying aboard a U.S. Department of Defense Space Force spacecraft. Throughout the development process, the NASA LCRD team worked closely with the Space Force as well as commercial partners like Northrop Grumman and the Massachusetts Institute of Technology (MIT) Lincoln Laboratory, a Federally Funded Research and Development Center. Northrop Grumman performed integration and testing of the payload and spacecraft, while MIT Lincoln Laboratory provided the instruments designs for LCRD and verified all of the NASA-developed builds.