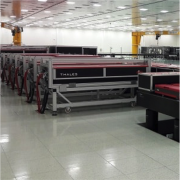 In a significant milestone, the ultra-high intensity laser system (world’s most powerful laser) developed by Thales has successfully generated its first pulses at a peak power level of 10 petawatts (1015 W). The feat was achieved under the Extreme Light Infrastructure for Nuclear Physics (ELI-NP) project in Romania.

After an initial development and production phase and preliminary verification of subsystem performance in France, Thales began delivery and installation of the world’s most powerful laser system at the Măgurele facility near Bucharest in late 2016. This system is designed to generate twin laser beams of 10 PW each and will be the core instrument of a unique new advanced technology and fundamental research facility in nuclear physics. The Thales system is now fully integrated and tested, with successful demonstration of a power level of 3 PW with each laser in 2018.

Since the start of 2019, the Thales team of French and Romanian engineers has been working on finalizing and scaling up the system, progressively increasing its pulse energy and peak power level. After demonstration of a beam delivering pulses of 7 PW for more than 4 hours continuously, the Thales system generated its first pulses with a record power level of 10 PW on 7 March 2019. Thales has thus achieved an unprecedented level of performance, which means that the Romanian National Institute of Physics and Nuclear Engineering (IFIN-HH) and ELI-NP now have the most powerful laser in the world.

With €3 billion invested in R&D every year, Thales has made innovation a strategic priority. The company joined the Extreme Light Infrastructure for Nuclear Physics (ELI-NP) programme in 2013 to develop the High Power Laser System (HPLS), the most powerful system of its kind in the world. This laser will support research in nuclear physics and help advance human understanding of the physics of matter.

According to Professor Gérard Mourou, winner of the 2018 Nobel Prize in Physics and initiator of the ELI infrastructure, the 10 PW is a tenfold leap from the power level demonstrated at the start of the project. It’s been a huge challenge for Thales and Romania — on a par with a lunar landing, where failure was not an option.