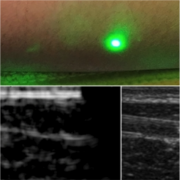 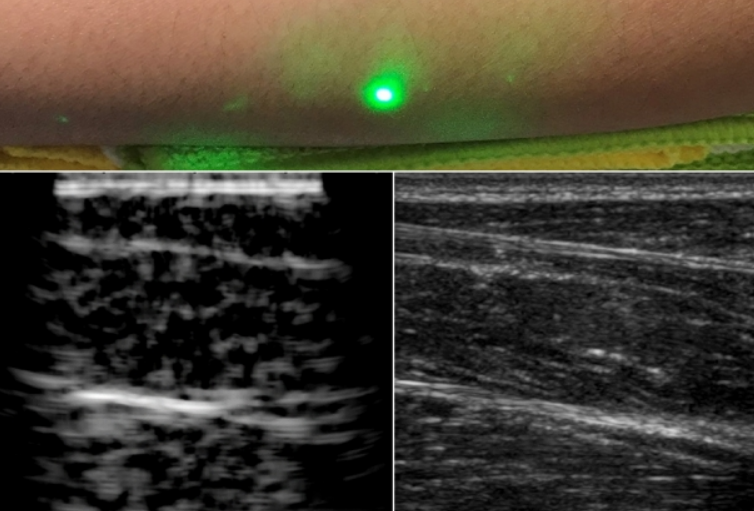 For most people, getting an ultrasound is a relatively easy procedure: As a technician gently presses a probe against a patient’s skin, sound waves generated by the probe travel through the skin, bouncing off muscle, fat, and other soft tissues before reflecting back to the probe, which detects and translates the waves into an image of what lies beneath.

Conventional ultrasound doesn’t expose patients to harmful radiation as X-ray and CT scanners do, and it’s generally noninvasive. But it does require contact with a patient’s body, and as such, may be limiting in situations where clinicians might want to image patients who don’t tolerate the probe well, such as babies, burn victims, or other patients with sensitive skin. Furthermore, ultrasound probe contact induces significant image variability, which is a major challenge in modern ultrasound imaging.

Now, MIT engineers have come up with an alternative to conventional ultrasound that doesn’t require contact with the body to see inside a patient. The new laser ultrasound technique leverages an eye- and skin-safe laser system to remotely image the inside of a person. When trained on a patient’s skin, one laser remotely generates sound waves that bounce through the body. A second laser remotely detects the reflected waves, which researchers then translate into an image similar to conventional ultrasound.

In a paper published today by Nature in the journal Light: Science and Applications, the team reports generating the first laser ultrasound images in humans. The researchers scanned the forearms of several volunteers and observed common tissue features such as muscle, fat, and bone, down to about 6 centimeters below the skin. These images, comparable to conventional ultrasound, were produced using remote lasers focused on a volunteer from half a meter away.

“We’re at the beginning of what we could do with laser ultrasound,” says Brian W. Anthony, a principal research scientist in MIT’s Department of Mechanical Engineering and Institute for Medical Engineering and Science (IMES), a senior author on the paper. “Imagine we get to a point where we can do everything ultrasound can do now, but at a distance. This gives you a whole new way of seeing organs inside the body and determining properties of deep tissue, without making contact with the patient.”

Early concepts for noncontact laser ultrasound for medical imaging originated from a Lincoln Laboratory program established by Rob Haupt of the Active Optical Systems Group and Chuck Wynn of the Advanced Capabilities and Technologies Group, who are co-authors on the new paper along with Matthew Johnson. From there, the research grew via collaboration with Anthony and his students, Xiang (Shawn) Zhang, who is now an MIT postdoc and is the paper’s first author, and recent doctoral graduate Jonathan Fincke, who is also a co-author. The project combined the Lincoln Laboratory researchers’ expertise in laser and optical systems with the Anthony group’s experience with advanced ultrasound systems and medical image reconstruction.

Yelling into a canyon — with a flashlight
In recent years, researchers have explored laser-based methods in ultrasound excitation in a field known as photoacoustics. Instead of directly sending sound waves into the body, the idea is to send in light, in the form of a pulsed laser tuned at a particular wavelength, that penetrates the skin and is absorbed by blood vessels.

The blood vessels rapidly expand and relax — instantly heated by a laser pulse then rapidly cooled by the body back to their original size — only to be struck again by another light pulse. The resulting mechanical vibrations generate sound waves that travel back up, where they can be detected by transducers placed on the skin and translated into a photoacoustic image.

While photoacoustics uses lasers to remotely probe internal structures, the technique still requires a detector in direct contact with the body in order to pick up the sound waves. What’s more, light can only travel a short distance into the skin before fading away. As a result, other researchers have used photoacoustics to image blood vessels just beneath the skin, but not much deeper.

Since sound waves travel further into the body than light, Zhang, Anthony, and their colleagues looked for a way to convert a laser beam’s light into sound waves at the surface of the skin, in order to image deeper in the body.

Based on their research, the team selected 1,550-nanometer lasers, a wavelength which is highly absorbed by water (and is eye- and skin-safe with a large safety margin). As skin is essentially composed of water, the team reasoned that it should efficiently absorb this light, and heat up and expand in response. As it oscillates back to its normal state, the skin itself should produce sound waves that propagate through the body.

The researchers tested this idea with a laser setup, using one pulsed laser set at 1,550 nanometers to generate sound waves, and a second continuous laser, tuned to the same wavelength, to remotely detect reflected sound waves. This second laser is a sensitive motion detector that measures vibrations on the skin surface caused by the sound waves bouncing off muscle, fat, and other tissues. Skin surface motion, generated by the reflected sound waves, causes a change in the laser’s frequency, which can be measured. By mechanically scanning the lasers over the body, scientists can acquire data at different locations and generate an image of the region.

“It’s like we’re constantly yelling into the Grand Canyon while walking along the wall and listening at different locations,” Anthony says. “That then gives you enough data to figure out the geometry of all the things inside that the waves bounced against — and the yelling is done with a flashlight.”

In-home imaging
The researchers first used the new setup to image metal objects embedded in a gelatin mold roughly resembling skin’s water content. They imaged the same gelatin using a commercial ultrasound probe and found both images were encouragingly similar. They moved on to image excised animal tissue — in this case, pig skin — where they found laser ultrasound could distinguish subtler features, such as the boundary between muscle, fat, and bone.

Finally, the team carried out the first laser ultrasound experiments in humans, using a protocol that was approved by the MIT Committee on the Use of Humans as Experimental Subjects. After scanning the forearms of several healthy volunteers, the researchers produced the first fully noncontact laser ultrasound images of a human. The fat, muscle, and tissue boundaries are clearly visible and comparable to images generated using commercial, contact-based ultrasound probes.

The researchers plan to improve their technique, and they are looking for ways to boost the system’s performance to resolve fine features in the tissue. They are also looking to hone the detection laser’s capabilities. Further down the road, they hope to miniaturize the laser setup, so that laser ultrasound might one day be deployed as a portable device.

“I can imagine a scenario where you’re able to do this in the home,” Anthony says. “When I get up in the morning, I can get an image of my thyroid or arteries, and can have in-home physiological imaging inside of my body. You could imagine deploying this in the ambient environment to get an understanding of your internal state.”

This research was supported in part by the MIT Lincoln Laboratory Biomedical Line Program for the United States Air Force and by the U.S. Army Medical Research and Material Command’s Military Operational Medicine Research Program.